So nice to see some familiar faces again this year but a notable few missing (pictured below). Also nice to meet some new fabulous vollies. 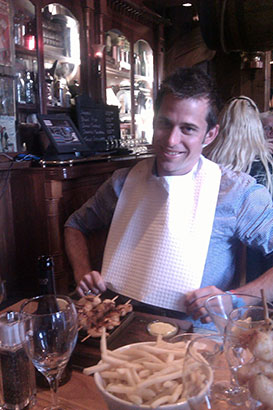 Starting in Launceston again at the Country Club Tasmania, I actually made it to the briefings this time and caught up with everyone at the welcome dinner.

My job this year was competitor support. Early starts but not quite as early as gear trucks.

Day 1
Picked up 4 teams and have given a name to the van, “the super bus”!
Drop off at Chudleigh, breathed a sigh of relief to deliver my teams safely. They got a mystery event this morning, which was wood sawing – it looked hard but was a fun start. Everyone was excited to see the wood sawing set up when we arrived at the field.
Lake Cethana dam is a picturesque location for the final leg, paddling. Many of the teams were paddling in quite late… today was a very long day!
Finishing here then transport to Cradle Mountain tonight.

Day 2
Not too early today, no duties this morning. Went to the start to cheer the teams on.
Tough gig; coffee, then faffing, then hunting for lunches (elusive), then eating leftover lunches from yesterday (cheese and vegemite, good stuff) then hiking! Yay! Did 1 hour 45 circuit from Ronny Lake to Crater Lake. Saw loads of teams on the track, cheered them on, one guy (later discovered as Reid) even stopped for a quick chat then ran after his team mate yelling “Rog! Just saw ladies!”

Down to the finish, bad manoeuvring of the super bus but ended up with 4 teams. A few naked bums, then fully clothed, fed and ready to go. Very interesting fuel stop in Tullah… Words cannot describe but a side note:
My teeth hurt looking at the wares in the shop, the attendant had none.

We arrived safely into Strahan. Interesting dinner, vollie briefing , cuppa tea and off to bed.

Tomorrow will be interesting the teams start with a dive off a boat followed by a kayak in a very tough bit of water!

Day 3
Early start to see the teams off the side of a boat at 7am. Poor buggers were dreading it and shivering on the ledge. In the drink and 100m swim to collect their kayaks.

We took the boat back to the harbour and couldn’t believe seeing a kayak in behind us on arrival, team 1. What I later learnt is that team 100 were even quicker!!

Brekky stop at Molly’s, Emma Snowsill joined us for a quick coffee.

Our next stop was a multiple TA where they came in on bikes, out on kayaks through some strong currents, over to an island for a run, kayak back and then back on the bikes. I took the chance for a beach run, it was super windy but great to get out. Tough work for 7kms but felt pretty insignificant compared to the competitors.

Finish line back at Strahan Main Street, it was blowing a gale and freezing cold!! Little Alex (Spinks) came off his bike and had to get some stitches, got him all wrapped up in a space blanket, he looked like a human yiros.

Loaded up the super bus for a big drive to Tarraleah via Queenstown, which was super windy roads and epic beautiful mountains. The rest of the drive was long and windy too. Tarraleah is interesting, an old hydro electric town that felt a bit like the set from Edward Scissorhands.

We were 20km back the way we came at Bronte Park. A great ski lodge with lots of open fire places. We got a nice hearty dinner had the briefing and took off for our cabin. Our cabin was great but we couldn’t get our fire lit 😦

Day 4
Back to Tarraleah first thing to pick everyone up and go to Mt Field National Park.

Toasted up some of the day before’s left over cheese sangas for the road. Awesome!
Got a great crew in the car, the super bus has quite the demand!
The start was a steep mountain bike ride, Soos, Steve and I drove to the top, cheering encouragement and having chats along the way. A few people said it was comparatively as hard as Jacob’s Ladder at Ben Lomond last year! It didn’t look as horrible but maybe the nice bush disguised it.
From the top, which was icy cold and stunningly beautiful, they got to go for a run.
We left Steve at the top and went back down to go on a walk of our own. Russell Falls and Lady Baron Falls, quite a nice little hike! Saw quite a few check points about.
Saw Richard and Bradon come back in and head off to the next TA on their bikes, so we jumped in our buses to beat them to the finish! I say ours, Soos called hers the little red caboose!
Final change over to kayak and a beautiful, albeit tricky paddle to the end. Several teams missed the cut off and weren’t allowed to do the paddle, which incurred a 6 hour penalty!
Here’s where logistics went to shit. I had to scoot back and collect non paddlers, when I got there there were less than I was told so went back to the finish with three guys, two then bailed out while the other had a sleep. Then I had to wait for a car load, I was the last bus out, a petrol stop required and the drive into Hobart. All the while James (the sleeping one) waiting patiently and was very good natured about the wait.
All were very happy to arrive. None more than me, I was so exhausted! So to be greeted with the news that we were 4 to a room with a couple of particularly cantankerous volunteers was more than I could deal with! Soos and I booked our own room, best decision!
Dinner with Sam and Kristina… Then back home, slept like a log!

Day 5
They started from the top of Mt Wellington with a run to the springs. My grand plan to drop competitors then follow them down the run was thwarted when I was retasked to luggage and bike deliveries.
Made it to The Springs TA1 to cheer teams for the transition to bikes.

Stunning day for weather.. About 24 degrees and sunny.
Departed there and grabbed a quick brekky at the farmers market before going to Long Beach for the next transition in from kayaks then the final leg to the finish.
I went for a run as far as the beach would go in either direction, only 4 kms. Discovered that the competitors needed to scramble over rocks to go around past the casino and then into the finish on the waterfront.

The finish was close and everyone streamed in, maybe the lure of the end drove them all a bit harder!

Had a lovely chat with Ben Allen about his “normal life” and how this event was “a bit of fun” during his 6 months in Oz. The other 6 he competes across 26 countries in about 15 multi sport races! He was one of the few not hurting at the end if this crazy week!!

Lots of families and friends came down to the finish which was really lovely.

Everyone happy and congratulating themselves and fellow competitors.
Back to the hotel to freshen up for the wrap up party.

I was in charge of shuttle buses to get everyone from the casino to the Henry Jones Art Hotel for the party. Really awesome to see everyone dressed up, some of the girls looked incredible. Most of the boys looked smart.

Great party atmosphere and excellent “party tape” with highlights of the event. Presentations to the winners and I was very honoured to get a mention from the team who came in second – Dean and Tim – “thanks especially to Sarah and the super bus!” Chuffed 🙂

Another excellent event, there is uncertainty about what will happen next year but I really hope it goes ahead as I will definitely be back!
A massive thanks to Sam from Rapid Ascent, you guys do an insanely good job. Thanks also to McBain Cycles, all the awesome vollies (G, Al, Peters – great to see you again), Octagon and all the inspiring athletes, particularly those who joined the super bus through the week, stopped for a chat on course, or sat with us for a coffee. Mwah!