A question I was asked many times before leaving on my holiday to Penang, Malaysia. On Thursday I left Siem Reap bright and early to catch a plane to Malaysia. Recently when my friend Markus was visiting, I met a new tuk tuk driver and he really impressed us with his communication, honesty and generosity, in fact after he dropped us off at dinner one night, he came back to say he wouldn’t be available later to pick us up. We hadn’t paid him. So we booked him to take Markus to the airport – where he apologised for letting us down and wouldn’t let Markus pay! So I booked him for this trip. On arrival he thanked me profusely for the payment and said he wouldn’t normally charge me but his niece is sick at the moment so he needed the cash! What a generous guy.

Anyway, after a couple of short flights and a short wait in between, I arrived in Penang. Wow! The drive in from the airport was nice, however, as we got closer to the city (George Town) the mish-mash of building types was so interesting and alluring I was excited (if still groggy from travel) to be there. We pulled up to the hotel, Hotel Panaga, it was a heritage style and extremely beautiful hotel. Good work to my friends who booked it! The staff attention to detail and organisation was a bit off but the stay was great and I’d stay there again!

The reason for my trip was to catch up with my best friend and her husband. They live in London so we’re lucky if we see each other once a year, them being in Malaysia was too good an opportunity not to meet up. They’d been there for a week prior to me and in that same hotel, so they organised an extra bed for the first night as we were then booked into a beach side hotel for the rest of the trip. What I hadn’t realised (probably due to a lack of appropriate questions on my behalf) is that Jimmy’s parents would be here during the trip , for some reason I’d thought they were meeting in KL and Penang was a side trip for us, silly assumption. Anyway, it was wonderful, we all met for dinner at a local drinks/food court and it was lovely to see them, and Jimmy’s sister, again. The last time was at Nat and Jimmy’s wedding last April in Perth. We then took a stroll around the bay near the ferries and watched a spectacular lightning storm light up the sky! 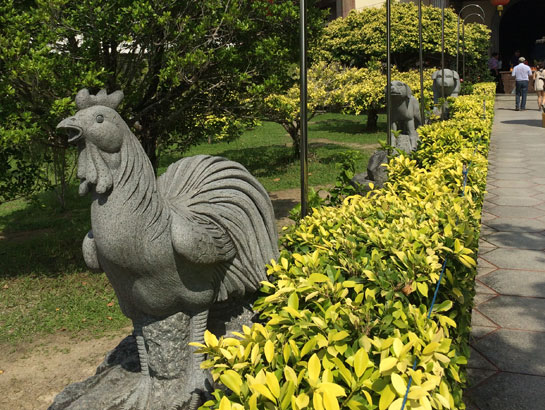 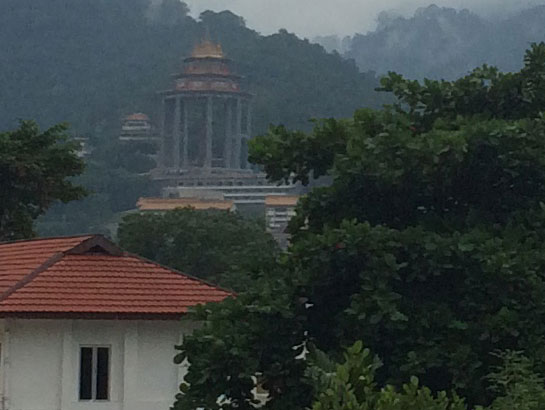 Back in town we got a very cool whirlwind tour of the George Town street art. Apparently it was Lee’s fourth or fifth tour! A very fun hop out, take a photo, hop back in the car again spin through town and the artworks were fun and creative! 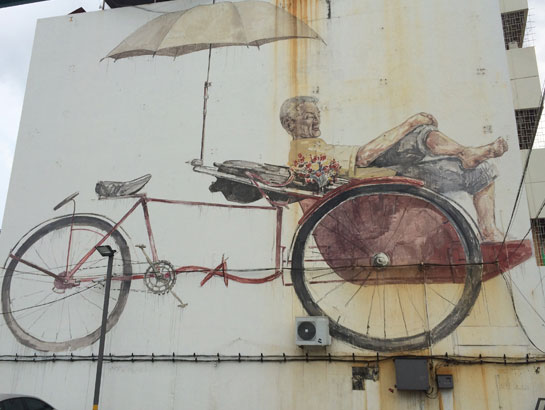 After this we took off to Batu Ferringhi, up the coast. We took the appropriate steps to enjoy the pool and free drinks! Then went for a wander through the local night markets. It wasn’t very alluring for my taste… so that was short-lived, we had some dinner, Char Keoy Teow, and called it a night.

It was a treat being in such a plush hotel, my last trip (Phnom Penh) wasn’t lavish and the grotty bathroom was a turn off. So, 4 star luxury with fluffy pillows, a killer view and a huge TV was out of this world compared to my now, very humble, lifestyle in Cambodia.

The following day we went to see some local galleries and unexpectedly strolled along the coast until we found the spice garden and some restaurants. We didn’t go into the spice garden but we did visit the café with a view over the water. We ducked back to the hotel for a short rest and then went to see the sleeping Buddha and some very shiny temples before going to an epic seafood buffet dinner, which was Nat and Jimmy’s thank you to their parents, sister and grandma. It was a nice night and a lot of fun! Watching Jimmy bring plates and plates of food over to his grandma and mum, then his sister doing the same – there were mountains of food! I sat opposite his dad who was alternating between his bowl of Cendol (jelly, ice cream, ice and condensed milk) and his savoury dishes – very entertaining and he was as happy as a kid in a candy store!

Sunday was the last day; we had a lazy morning and then went to the spice garden, this time with Jimmy’s dad and sister – which was perfect because Jimmy’s dad is a chef and it was a lot of fun to do it with everyone! Then we went through town and saw some more street art, which was a little more relaxed as it was new for everyone and then we went to Jimmy’s grandma’s place – where we could see the Kuan Yin statue and Penang Hill (!!!), before going for dinner and then out to the airport. After some farewells, there was a little more time before my flight so I sat and wrote. 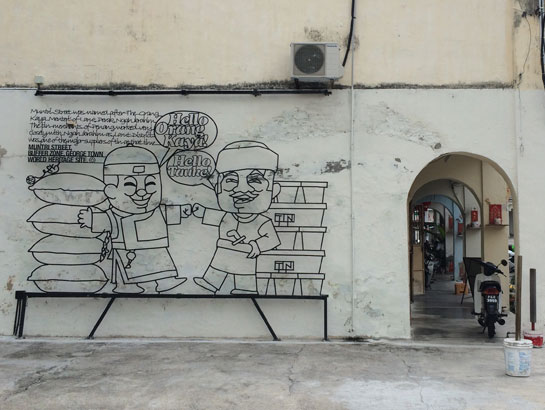 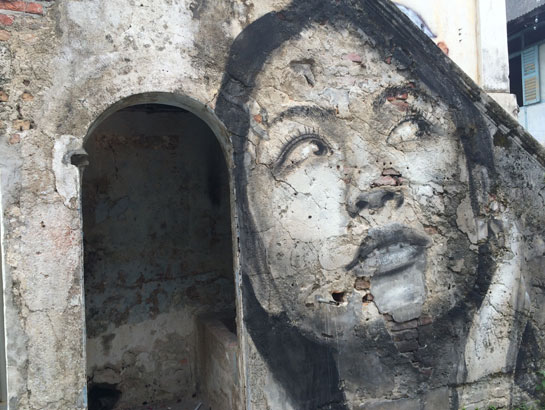 Visiting Penang was excellent; I was there too short a time and cannot wait to visit again. Though I felt removed from Siem Reap it was my first time away that I felt a strong desire to get back there. Unfortunately on minimal sleep and straight into a full day work shop but hey, I had to max my holiday time!