The last couple of weeks have been a blur. I feel disconnected from family and friends during what is usually a time of year spent together. It’s not to say I haven’t had fun, au contraire, it’s been great fun! Just a little different.

There wasn’t really a festive vibe, the closest thing I got to being festive was to go to one of the big hotels in town with my soccer friends for a few cheesy photos. To be honest, any occasion with them involves cheesy photos, gotta love ’em. In fact if anyone made this a Christmas to remember it was definitely my lovely friends from soccer. 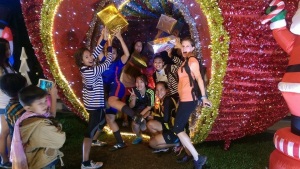 In the week or two before Christmas, the major hotels and some of the smaller ones decked out their frontages in Christmas lights, fake snow, presents and the biggest ones even attracted popcorn and fairy floss vendors! After our last soccer game of the year we went to visit one such hotel to be a little merry. This may have resulted in getting kicked off the Christmas display and I’m sure many other offences but it was a lot of fun. The lights around town made it very pretty and I think there were more lights than I’d seen in Adelaide!

Then it was pretty much life as normal up until Christmas Day. I did sneak in one or two Christmas dinners, but they were really just excuses to catch up with friends.

Christmas Eve was meant to be a quiet affair but ended up with friends at a local bar and this is something I usually do so it was really nice. I was with some close friends and some of their friends and it’s the kind of place where I bumped into more friends and it ended up being quite a late night! One friend wore a Santa hat and the owner of the bar was decked out in a green three-piece suit – very jolly. 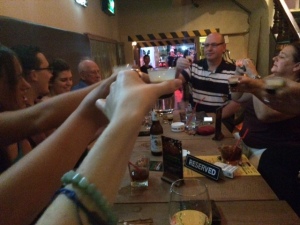 Christmas Day I was up early, hoping to have pancakes and hot chocolate with my housemate. Whilst waiting for her to emerge (she celebrated Christmas Eve), I went to the local market to pick up some food for the evening and to get a gift for the family we rent from. I returned, still no sign of the housemate, and started making eggnog, chatted to my family in a somewhat chaotic series of phone calls and then got ready for lunch with my ‘school friends’. Lunch was at the Raffles Hotel, which is a rather swanky place! The front is pristine on the border of sparse; white gravel driveway, cream colonial style building. Walking inside everything is different, a smartly dressed man opened the door and I entered the foyer to a Christmas tree and carollers! I said hi to everyone but most were already at the buffet. As I walked into the buffet room, yes an entire room, I got two surprises: there was more food than I’d ever seen in one place before and one of my lovely soccer team mates was there with her family! Yay!

After lunch there was some time to go home and relax before I’m not sure how many people would be coming to my place in the evening. It turned out to be most of the soccer team and their families and it was really great! A few kids in tow and I briefly was worried how they would amuse themselves, then realised that they’re Cambodian so cushions and shadow puppetry and little bit of pop music and they were set. My Khmer friends took over the kitchen and I kept the drinks topped up. We had wine and eggnog, dumplings, garlic bread and cold rolls, and more cake and biscuits than you could count. The daughter of our land lord and land lady visited bringing an armful of soft drinks, snacks and a gift for my housemate and I. It was really sweet.

Things dwindled and I thought it was going to be it for the night when the girls let me in on their plan to head to town and paint it red. 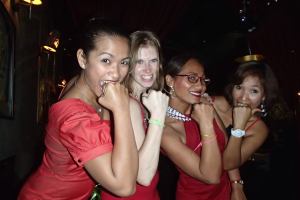