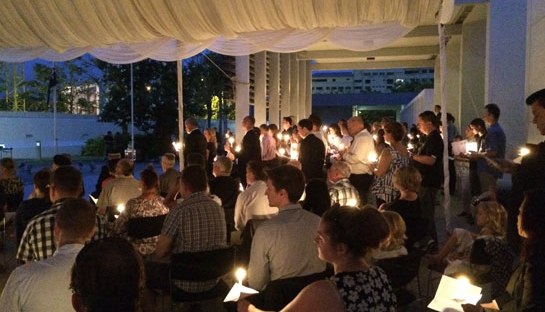 Around 4:45 on Saturday 25 April I entered the Australian embassy in Phnom Penh to attend the 100 years anniversary of the landing at Gallipoli.

As guests to the embassy we were welcomed in warmly and directed to programs and candles… And coffee, Anzac biscuits and rum!

As the courtyard filled up it was wonderful to see so many families; the next generation of Australians will also know the significance of this day.

The significance of us gathering together at dawn, the time that the first of the Australian troops to join World War 1 left their ships to row and land on a treacherous beach to fight against the Turks. My great grandfather, Lance Rhodes, was one of them; he lost one good mate before they even made it ashore and his closest friend during that first day. After 6 months of training in Egypt and a stint on Lemnos Island until they were called into action, the Australians (and New Zealanders) were raring to go, what they got was much more than they anticipated. They took it stoically, bravely and fiercely. This was the beginning of 4 years of fighting, the beginning of what is now known as the Anzac Spirit, and this year was the 99th commemoration of this event.

The chatter and warbling of Miner birds and roosters crowing were an interesting change to the squawks of cockatoos and familiar warble of magpies.

The service was well presented, the New Zealand and Australian national anthems were sung and then it concluded. People milled around for a time, photos were taken of servicemen representing Australia, New Zealand and Cambodia.

After a short chat with a visitor from Sydney I walked over to the Cambodiana Hotel. I was reading a book from a photo journalist, Roland Nuveu, who was in Phnom Penh when it fell in 1975, one of his photos was of the Cambodiana. Here I met a girl from Sydney doing an internship at the war tribunal (where my friend Marion interned a year or two ago). She had recently the great pleasure of meeting the author of that book!

The gunfire breakfast was done well. Full buffet and a special feature – Vegemite! It all wrapped up pretty quickly and this formal part of my day was over by 7:30. Not realising this would be the case and my guesthouse being conveniently located across the road I went back for a rest. I received some photos from my mum of my brother and grandpa at Semaphore’s service. Had a quick call with my friend in the army who was in Canberra. He assured me that Anzac biscuits and rum were standard… Ah, maybe only if you’re an officer!

After a rest I rejoined the world, seeking an Aussie hangout. What I found was an excellent Aussie pub, aptly named Aussie XL, just a little way down 51st street. The footy was on the TV and there was a great atmosphere. After meeting Wally, Loretta and John I let them focus on the footy while I focused on a schnitzel – so great! Such a lovely bunch; Wally paid for my lunch, Loretta and I will meet for coffee and John and I swapped business cards.

To conclude the day, I went to the palace to meet a friend. Whilst waiting for her I was the centre of attention; do I want to buy this or that snack, give a young kid a dollar, share my phone screen with a couple of inquisitive tikes? No.

Sarun arrived and saved the day by sweeping me off to roof top drinks. It was an excellent evening and an Anzac Day to remember.